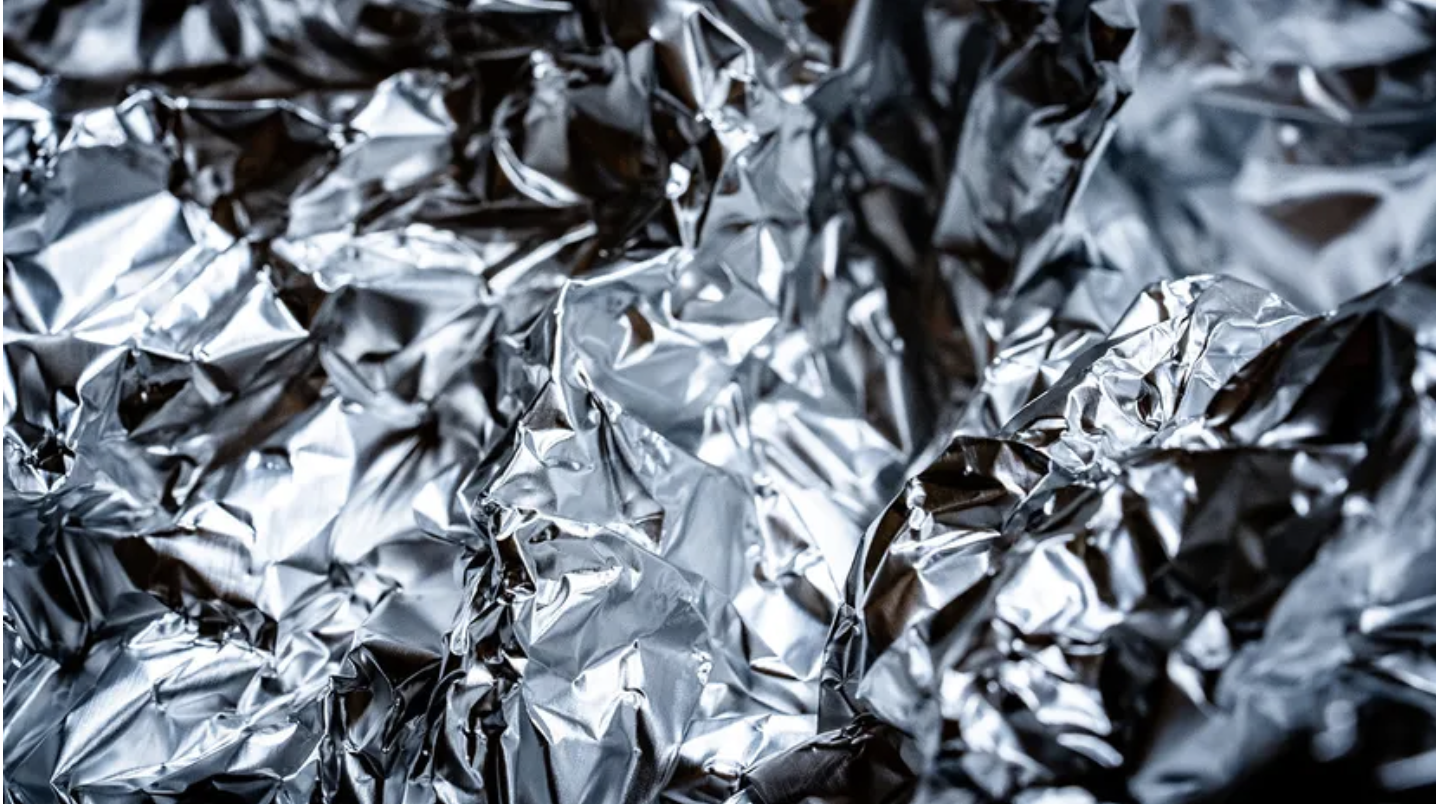 Aluminum doesn’t burn because it is a metal with a melting point of 1,220.40 degrees Fahrenheit (660.3 Celsius) at Standard Pressure. What gives aluminum such a high melting point is the structural nature of its molecules. Molecules with strong bonds require more energy to break and aluminum has strong, covalent bonds*. Covalent bonds are chemical bonds which involve the sharing of electrons between atoms to form electron pairs. These pairs of electrons, or shared pairs/bonding pairs, allow each atom to attain the equivalent of a “full valence shell,” which corresponds to a stable electronic configuration. Stable electron configuration = you can put your leftover quiche on a strip of aluminum foil in the oven without causing a fiery explosion:

Aluminum is the world’s most abundant metal, making up about 8.2% of the Earth’s crust. This helps explains why the cost of the metal is so low when compared to other, less-common metals. But this low cost is a relatively recent/post 1860s phenomenon. Aluminum is never found in a pure state in nature, it is always mixed with other elements, in compounds like alum and aluminum oxide.

For years aluminum was expensive because humans hadn’t mastered the refining process yet.

To obtain aluminum today, humans first mine the substance bauxite, the basic raw material from which most of aluminum is produced.

Bauxite was named after the French castle Les Baux, in Provence, where it was first discovered. Here’s a photo from Les Baux in December of 2019:

During the refining process bauxite is crushed, mixed in a sodium hydroxide solution, then the impurities are taken away through filtration and settling, which leaves us with alumina.

The alumina is then dissolved by heating it via pressurized steam.

When Aluminum was first discovered in the late 1700s, it was considered a precious metal and was worth more than gold. It was considered so valuable that when the Washington Monument in Washington D.C. was first built between 1848 and 1884 (starting and stopping for 36 years due to lack of funds, bloody Civil War, etc.), the U.S. government wanted to have a precious metal cap, and chose aluminum (at this point the price of aluminum was about the same price as silver, $1.10 an ounce).

They hired William Frishmuth of Philadelphia, a German chemist who had emigrated to the U.S. and who had worked as a secret agent for the War Department at a request from Abraham Lincoln, for the commission of creating the monument’s apex. The Washington Monument would be the tallest structure in the world for five years between 1884 and 1889, before being overtaken by the Eiffel Tower.

Frismuth had spent 28 years and $53,000 of his own money ($1.6 million today) experimenting with the refinement of aluminum. The process that he had created was to heat the ore until the alumina vaporized, then add sodium vapor. When he created the tip of the Washington monument, it was the largest piece of aluminum cast up until that time, at 8 inches tall. Cost = $225 ($7,000 today).

Less than two years after the completion of the Washington Monument, Charles Martin Hall (a recent graduate of Oberlin College, Ohio), discovered a process for making aluminum common and cheap…so cheap that Aluminum would replace iron as the #1 most widely-used metal by humans, which iron had held uncontested since it’s prehistoric discovery 5,000 years prior.

Charles (after numerous experiments in a homemade coal-fired furnace and bellows in a shed behind his family home) dissolved alumina in a molten cryolite bath, then ran electricity through the mixture for 2 hours. He was left with a puddle of aluminum in the bottom of the “retort”/container in which substances are heated at high temperatures. Success. In 1886 he filed a patent on the following reaction:

For two years he couldn’t get financial support at home so in 1888 he went to Pittsburg and founded the Pittsburg Reduction Company with $20,000. The process he created would reduce the price of aluminum by a factor of 200. He’d go on to make a fortune of $27 million. The Reduction Company later became the Aluminum Company of America, then Alcoa, which is a company that earned $12.152 billion in revenue last year.

At the same time a young Frenchman named Paul Heroult who was the exact same age as Charles Hall (22) was working on the same, refining process. He succeeded with it two months after Hall.

At the age of 15 they had both read the same “famous” book on aluminum by Henri Sainte-Claire Deville, De l’aluminium. Ses propriétés, sa fabrication et ses applications. Heroult would also patent his discovery the same year (1886) and set up his process at an industrial scale, creating the SEMF/Société Électro-Métallurgique Française. Despite these parallels, they were polar opposites in personalities. While Charles was quiet, obedient, and studious Héroult was “sent to a series of boarding schools, possibly in part to tame his rebelliousness.” Christian Bickert of the Pechiny corporation, a major aluminum conglomerate based in France, described Paul:

“Paul Héroult had none of the attributes of the traditional scholar. He was highstrung, unruly, occasionally hard and insolent; he did not fit the image of wise, disciplined men of science. He loved games, the company of women, travels by land and sea; he was a free spirit in an impetuous body. No comparison with the austere scientist, struggling with stubborn mysteries. His discoveries were not the result of long sleepless nights spent in a laboratory, or of complicated scientific demonstrations. Héroult loved life, and could not have borne such restrictions. Instead, his inventions appeared suddenly, out of the blue, a stroke of common sense, or of genius, sometimes during a lively game of billiards, his favorite pastime.”

Due to the close timing of Hall and Heroult’s discoveries the process is now known as the Hall-Héroult process, the major industrial process for smelting aluminum. They would both die the same year, at the age of 51 in the year 1914. Hall was unmarried and childless, and left most of his fortune to charity. Heroult left behind a son named Paul, billiard tables, and a 35 meter yacht named Samva.

The French wikipedia page on Paul Héroult is considered the oldest French article on the website, dated May 19, 2001.

Thank you, Aluminum twins, brothers across cultures, countries, and character…for your contribution that has echoed across a century, a contribution that has formed an essential foundation to the manufacturing edifice that quietly supports our modern habits, responsible for necessary goods such as airplane parts, beer kegs, window frames, kitchen utensils, cans, roofing, insulation, electronic devices, guttering, skyscrapers, flat screen TVs, mirrors, coffee machines, tablet PCs, bridges, the outer cases of cell phones, and doors…the potential technologies and worlds we build will forever pay homage to your discovered method of extraction.