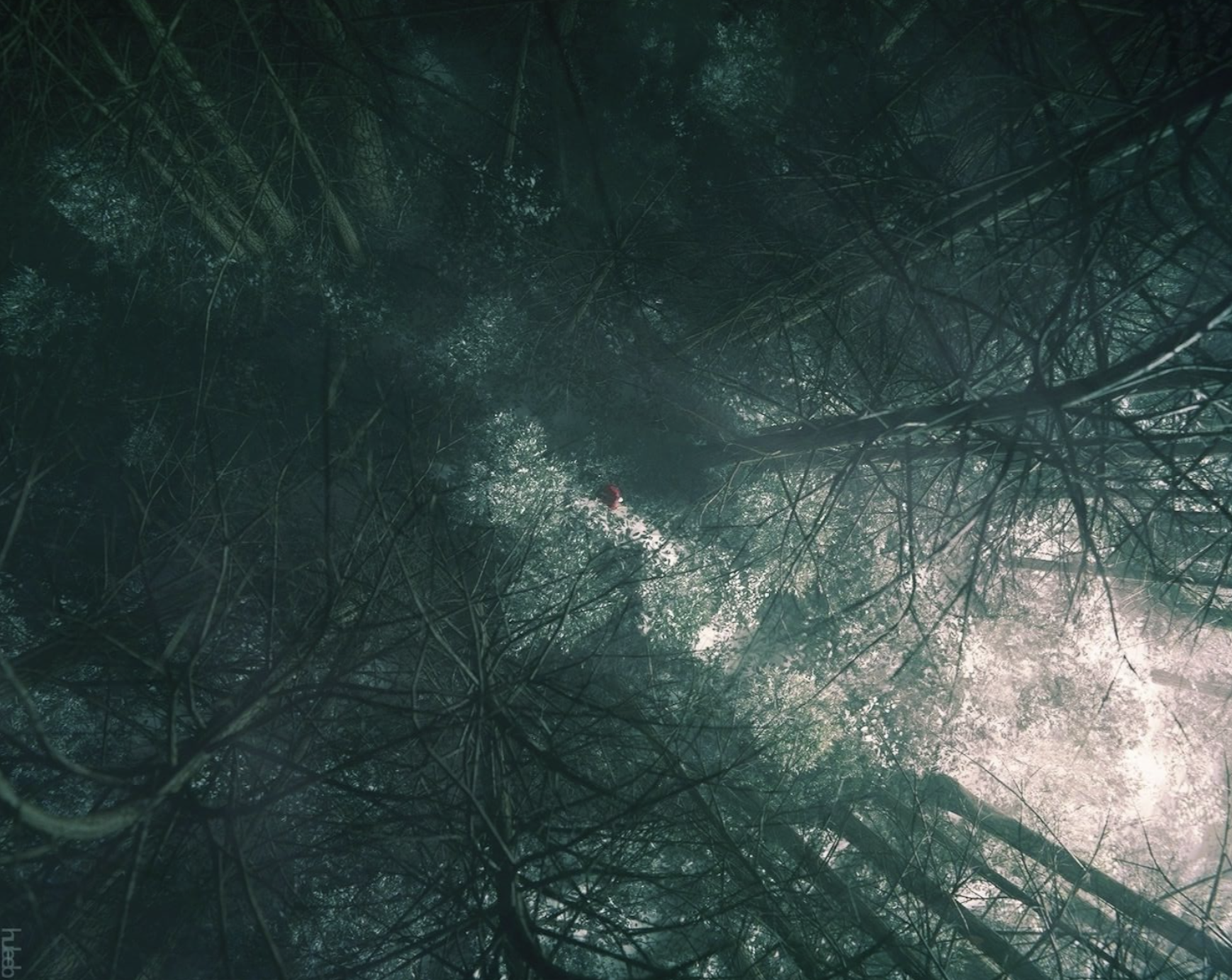 “Something hit us in the sky. Or…more likely…multiple things. Everything was chaos. Parts of the ship exploded. I couldn’t leave the pilot’s chamber but the door of my adjoining emergency landing pod opened. Instinctively, I jumped in and grabbed hold of a handle, since I knew from the I.M.C. manual that the interior would protect me against the force of the crash landing. There was a window looking out at the hull. I saw hundreds of bodies slamming against the ship’s interior. Sections of the ship were breaking off…”

Captain Premidaire was slumped against a tree beneath a make-shift canopy I’d constructed using my sleeping bag and iron filament. We were taking shelter against a torrential, sleet-like, purple rain. Premidaire was having one of his lucid moments, which were becoming more and more rare, so I tried to gently guide him, again, to the question I was desperate to receive an answer to. I couldn’t ask him any questions that were too far from his thread of thinking, or else he’d degrade back into his state of mumbling confusion. Premidaire was steadily going insane and I had no idea how to stop his descent into madness.

“And after the ship crashed, what happened?”

“Screams. Horrible screams. Fire. Crawling through the wreckage. Then they came…”

“Who came? You keep saying, they came. That insect-tentacle creature I mentioned? The one who digs holes? That monstrous thing?” Premidarie let out a high-pitched, maniacal laugh. He’d done this before. I grimaced because this meant he was most likely going to have one of his dementia episodes in ten to fifteen seconds.

“Those things? They just like fire. They’re the clean-up crew.” He laughed again, a higher-pitch tone. “They are nothing compared to what else is on this planet. Nothing. This planet is fighting back. Those insect things were there when…the rest were being led away, by them…”

“How long ago since the crash?”

“That’s impossible. I was alone when I woke up. I would have died of thirst. You told me two days.”

“If one of them found you, unconscious, they might of saved you.”

“Who else survived?! Were there any women with you?! Did one of them have-”

“I put everything in the GlobalDataBase before I left Earth. They will remember me. Feel the existence, no more force, they told me to fill out questions, put the Enregiste-Nanobots in my brain, stand in front of the camera, these were for history, they could make a copy, not the same, but close enough, the artist must create in darkness, everything is created from darkness, to find their light if there is the chance another…”

I sighed. Another hour of his babbling. Then when he returned to silence, or fell asleep and woke up, I’d try again. I turned off the recording device in my tablet. In my frustration I turned away from Captain, who was still mumbling to himself, now whispering, “I have to take it again, but I also have to run away, feel desperate, hopeful desperation, fight this, run or stay, Siana my love, I…” It seemed to me that whatever sickness Premidaire was suffering from, he was unable to distinguish between emotions, memories, or abstractions when having an episode. It was like his subconscious was overtaking his consciousness.

“Ouch!” a rain droplet landed on my skin, burned, and sizzled, leaving a red disc-shaped wound. The rain droplets here are often toxic, like acid. Premidaire somehow knew this and had me construct our shelter when we heard a rumble in the night and the air become heavy with moisture. When Premidaire’s lucid and focusing on a task, he’s impeccable and efficient. You don’t get to become the captain of human’s second migration without being extremely effective in everything you do, which made the contrast with his incoherent grumblings all the more terrifying to observe. I turned to my side and saw the basset hound creature still sleeping in his nest.

“Walter!” For a wild moment I thought the creature had spoken to me.

“What!” The captain had grabbed my shirt. I was shocked: he had never escaped one of his trances so fast. Perhaps his mind was fighting back, knowing how much of our survival depended on him relaying me pertinent information.

“There are…there are human-like aliens on this planet. Different kinds, races, cultures. They knew we were coming. They were waiting for us. The machines who scouted this planet told them everything about us. Some of them want to use us to leave this world, others to survive. That’s why they kept you alive, to learn about us, I don’t what their purpose is, but their sophisticated-.”

“Are these aliens the ones you escaped from?”

“No. I escaped from other things. These human-like aliens just didn’t want to take me. They said I was hopeless. The particles in the air, they affect everyone at different rates and in different ways. Humans faster than them. If the infection reaches a certain point, it’s too late, there’s only one antidote, and each member of their group has one emergency for themselves per lifetime.”

“Per lifetime? What do you mean by…”

“I wanted to stay with them. They wouldn’t let me.”

“These alien-creatures took some humans and left others? Who else was left with you?”

“And they’re all dead except you?”

“Yes, I saw half of them die, the other half went in a direction where no human could survive.”

“And the humans that left…which were taken by these alien-humans? Did you see a woman amongst them whom-”

“She’s right there! You can’t take her away! Your mistakes will-”

“Shhh, shhh, something’s coming…” There was a clicking and crashing through the dense vines and trees.

“You shouldn’t come here. Now the particles can infect you faster…”

“Shut up! Or I’ll stuff your mouth god damn it!”

Bunky, my alien basset hound, woke up and growled.

Through the jungle another insect-weeping-willow monster crashed, heading directly towards our shelter. Within a split second Bunky darted into the monster’s path and started slash-gnawing on the inner tentacles. The monster screeched like it did when I fell running away from it. It tried to grab hold of the basset, but the basset was moving so rapidly amongst the squirming arms that they couldn’t catch him. Within a minute half the creature was consumed, ten seconds later it was a small ball (Bunky seemed to eat the thing exponentially faster). Then the monster was gone.”

“You’re lucky one of those likes you,” said Captain Premidaire.

“One of what?” I was staring at Bunky, in awe, while he dolefully licked his chops.

“How do you know it likes me?”

“I feel myself losing control. The regret. I never wanted her to. But the atmosphere weighs down. I’m so sorry Siana. I’ll make everything right. We-” his voice lost its force and he stumbled back.

An hour later Premidaire was sleeping and the rain had stopped. A sunrise burst through the vines and branches. Light sparkled and glistened as droplets dripped from the trees. Maybe I was also starting to lose my mind, or maybe it was a lack of sleep, but the colors began mixing and blurring together, like sparkling smeared paint across a canvas. This made me worried. Perhaps I should stop questioning Preston Premidaire about my wife the and survivors. Perhaps I should focus on our own survival. During one of his lucid moments I had him explain some of the functions of my tablet. He had shown me a map that led to a city that was supposed to be under construction since the first migration. He pointed out the F.A.T. magnetic-train line (Frictionless Automated Transport) which the machines built upon their arrival. If there were any humans alive from the first wave, they’d be in the city. I loaded up the map. The city was 2500 miles away. I’d have to travel 500 miles on my own to the F.A.T., then…wait for a train? Premidaire couldn’t explain to me how the transport system works. We’d…we’d need help from…my eyelids are starting to…if we don’t contact the people here we die…we…”

I fell asleep. When I woke up with a start the rain had stopped and the clearing was bright. Before even becoming fully conscious, I was aware that Preston Premidaire had left. Why…but when I looked around the clearing.

Preston Premidaire was hanging from a tree.