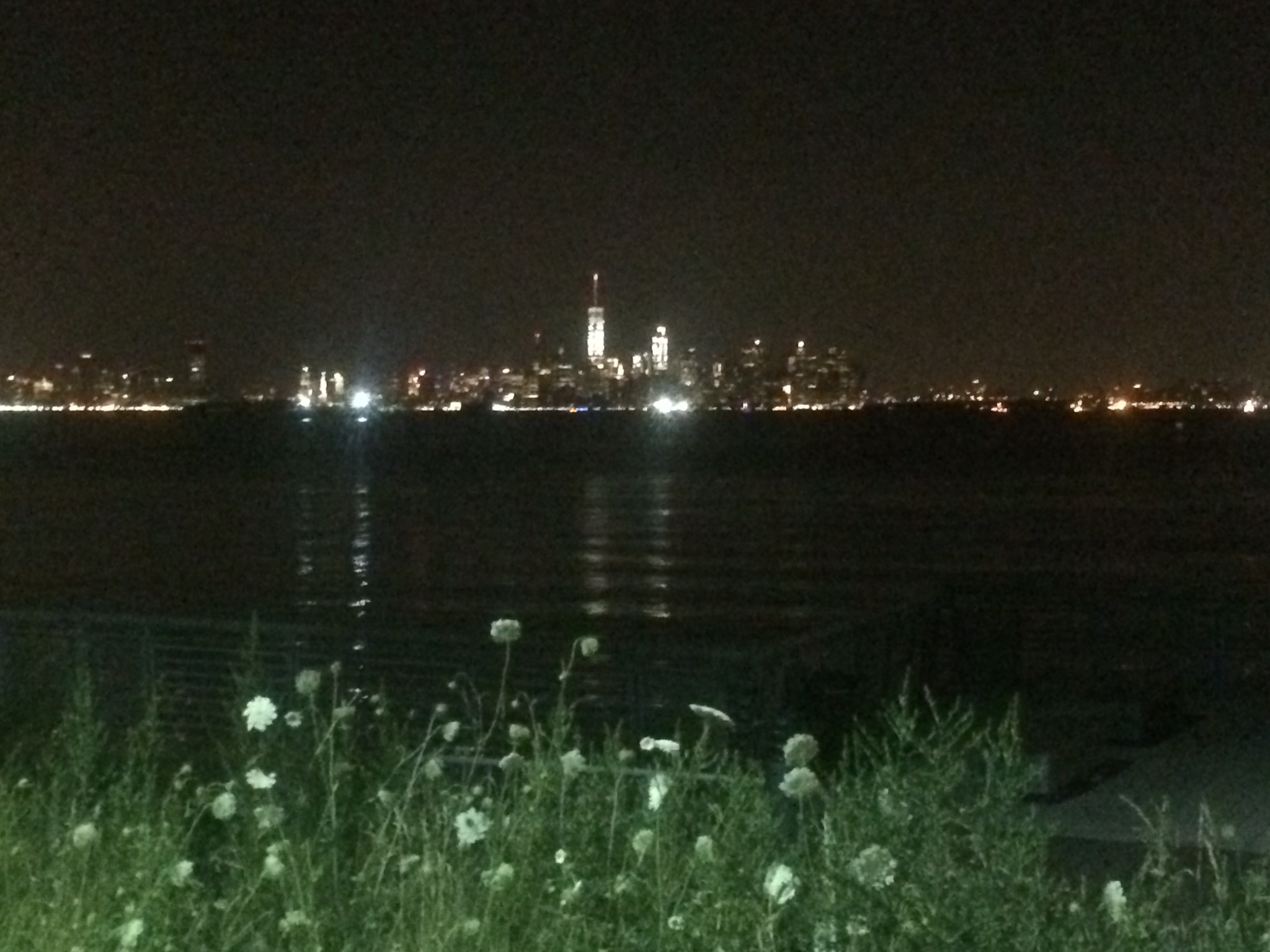 This story is extremely embarrassing and compromises my masculinity, but one must take no self-conscious prisoners in the glorious and noble pursuit of truth.

It was 2am on a Wednesday night. I was going home after a strenuous restaurant shift. While passing the subway shop in the St. George terminal I saw a pretty woman in formal dress walking ten steps ahead of me. Despite the friendly beckoning of the Indian man who works the graveyard shift at the subway (we often joke with each other that neither of us sleep, that all we do is work, give each other high fives, and he gives me free cookies) I merely acknowledged him with a head nod and kept walking. For some reason, in my exhausted, lust-shredded mind I thought, “Walk past that woman, just walk past her.” So I tightened my grip on the straps of my jansport…and increased my gait.

Once outside I passed her on the right and looked at Manhattan across the bay. Mission accomplished. But wait a second…what did I even do? “You’re an idiot,” I thought. “But don’t look back.” I walked faster and admired the lights of the skyscrapers in the distance. Someday, Manhattan, I will return. A feeling of conviction and power rose within me. That’s my city, the greatest city in the world, the city of fleeting chances, intensity, insanity, wretchedness, riches, loneliness, clashing and thrashing, thwarted and realized dreams, desperate hopes. It was a hot summer night.

“Hey, do you have a cigarette I could bum?” a feminine voice behind me asked. I turned around and smiled.
“No, but if I did, I’d give you one.” Yes, she was also pretty from the front…she looked Jewish. She had curly black hair, green eyes, and a nose ring. A quote from a story I read in the morning came to mind:

“It was a touchingly beautiful face, just as always the beauty of Jewesses is of a peculiarly moving kind – a consciousness of the deep misery, the bitter scorn, and the evil chances wherein their kindred and friends live, brings to their lovely features a certain aching tenderness and observant loving apprehension that strangely charms our hearts.”

I read too many books. I slowed my gait and she picked up hers.
“Why the hell are you wearing khakis?” she asked.
“I just got off work.”
“Where do you work?”
“I manage the bar in the Whitehall ferry terminal.” Now we were walking next to one another. I thought this was funny and felt strangely at ease.
“But why are you wearing khakis.” She might have been drunk, but she also seemed like a spark plug of a girl and peculiar. Her strong tone of voice and acerbic mannerisms struck me as flirtatiously inquisitive and feisty.
“I told you this already, I’m walking home from work.”
“Wait, do you live on Staten Island?”
“No, Brooklyn. I’m taking the long way home.”
“Oh my god, you’re hilarious. But really, you live, like, close by?”
“Fifteen minute walk down Richmond Terrace.”
“I’m down Richmond terrace, too.”
“Let’s walk together. I’ll protect you from any strange men you might meet.” She laughed.
“But wait…why do you live on Staten Island?”
“Cheap rent. Short commute. View of the water.”
“I mean…but why do you live here?” She was starting to get on my nerves. But I thought I’d at least get her number.
“I just told you.”
“But who lives here?! It’s such a shit-hole. I hate this place.” For the next five minutes she basically kept repeating how much she hated Staten Island and commenting on the ridiculous fact that I was wearing khakis. Then she stopped in front of some shadow-shrouded stairs.
“Hey, wanna come inside and smoke weed?”
“Sure.” I knew I wasn’t going to smoke weed…I rarely smoke weed with strangers anymore because I get the fear. But yes, I’d gladly follow a pretty woman into her apartment and see what happened.

Let me pause and say this kind of thing never happens to me. I’m not a strikingly handsome guy. Women have never fallen into my lap. I’ve always had to spit incessant, shameless game for a woman to think I’m attractive. The only time something remotely like this ever happened was in Atlantic City five years ago. My friends and I were taking an elevator up to our room and three, drunk girls joined us. One of them pointed at me and said, “You’re really cute. Come to my room in ten minutes: 2678.”
“I will.” Ten minutes later I’m sweating outside 2678 with a throbbing heart and a condom in my back pocket. The door opens to reveal an old man in a bathrobe, “Who the fuck are you?” I walk away.

Inside, the pretty Jewess’ apartment was a mess. Piles of clothes were scattered all over the floor. Weed paraphernalia littered a low table in front of a couch. There was a record player in a corner and abstract art on the walls. The apartment was spacious and looked large enough to accommodate two people. Ah, yes, that’s it…perhaps I’m a rebound. I’ll take it.

We sat on the couch and chatted about innocuous things. She worked for airbnb and didn’t like it. Her boyfriend moved out months ago. She still kept saying how much she hated Staten Island and asking why I lived here.
“I refuse to answer those questions anymore.” A wave of fatigued washed over me and I almost passed out. I had pulled an all-nighter the night before and was averaging 4-5 hours sleep a night for the past month. Sitting on the couch and not moving made me realize how exhausted I was. Should I go home? No, of course not. There was a lull in the conversation and she said:
“I’m usually more witty than this,” We were sitting very close to one another at this point: now now now. I clumsily kissed her, then she pushed me away. I’ve played this game before. I leaned back, put my hands behind my head, and relaxed. Again, I almost passed out. She smiled and stretched out on my lap. I massaged her breasts. They were large.  She climbed on top of me and took off her shirt. Her body was nice. Better than expected. I was now fully awake. Most girls I’m attracted to don’t have large breasts, so I took this opportunity to play with them: lift, knead, grasp, flick.
“I’m gonna go take a shower,” she said.
“I’m coming with.”
“Alright.” We strip and step into the tub. Her eyes widen when she sees my body. With clothes on I look skinny, but from all the running I’m fairly muscular and girls are usually surprised when they see me naked.

While showering we kiss and play with each other. We also laugh and joke about things I can’t recall. At one point, though, I do remember her saying,
“You’re so weird. You’re like a dad.”
“I know. You’re not the first person to tell me this. I like being weird.” She kept leaning down and rubbing her butt (which was also nice) against my pulsing cock. I was consumed by lust and tempted to take her in the shower, but thankfully the voice of reason shouted: no way are you taking this strange woman who brings a stranger back to her apartment without a condom.

For a moment, while sucking on her nipples (which were on edge of being pancake nipples…but still very nice) in the shower, I thought about the silly absurdity of this situation. While on the ferry boat back to Staten Island I was thinking about working on my novel for an hour then blissfully passing out on my comfortable bed…now here I am, in a bathtub, gently rubbing this stranger’s clitoris while her nipples are in my mouth. How drastically our lives can veer in a different direction.

We dried each other off and walked back to the couch. For a moment, my vision faded while walking through her apartment…my desire for sex was fighting valiantly against fatigue.

We cuddled and kissed some more. I retrieved a crumpled condom from my jansport and put it on. She played “hard to get” again and playfully denied me, but we both knew where this was going.

I flipped her on her back and mounted her. I put it in and began slowly thrusting. She turned on her side and closed her legs more…I think to make herself tighter? Then something extremely embarrassing occurred which had never happened to me before…

I went soft. While inside her.

I pulled out. She climbed on top of me and I became hard again. I slipped it in. But after a couple of thrusts…

I went soft again. While inside her.  The Horror The Horror.

She sighed and laid across my lap. Her smooth, round butt was inches from my face. My limp penis refused to respond. I ran my hands along the beautiful contours of her ass. I couldn’t understand what was going on. Here was a pretty woman who wanted to fuck…and my penis was letting me down. Like an idiot, I said,
“I’m…I’m really tired. I haven’t slept a lot lately.”
“Excuses.” She wiggled her butt. My mind continued to spiral down in confusion and loathing. What was wrong with me? This woman was hot! I wanted to fuck her, but…but…but…

I passed out. I woke up an hour later with her butt still inches from my face. She was asleep facedown on the couch and snoring. I gently lifted her off my groin, walked over to my jansport, pulled out a business card, and left it on the table.

Outside the sky was gray and the birds were chirping. Believe it not, I felt happy. One of the many reasons why I enjoy New York City so much is the innumerable possibilities for wild things to happen. I arrived at my apartment, slept a few hours, and went to work.

The next day she texted me. We flirted through texts for the next week. One night I was walking home and saw her sitting outside her apartment with a man. He seemed to be pleading with her about something while she looked disinterested. I asked her about it via text message the next day (“Was that your bf?” “He thinks he is. He wants to be.”)

Not long after I lost my phone and almost all of my phone numbers. Our conversation was lost. I’ll most likely never see her again. I do remember, though, the last thing she texted me when I told her she wasn’t that witty:

“Whatever you say, noodle dick.”