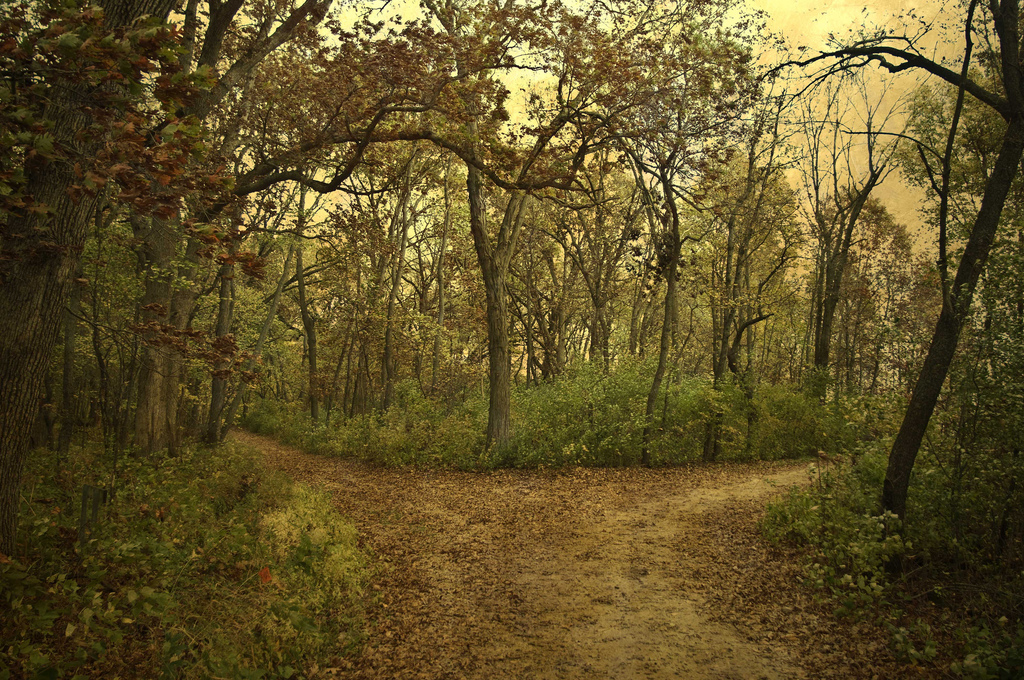 During college I took almost all of the economics and psychology courses available and was conscious that many of the concepts and insights of both disciplines overlapped. They often had different names for the same, exact thing.

I won’t bore you with specific examples from each field, but there’s one concept in economics which I don’t remember discussing in any of my psychology classes: path dependence. I believe an in-depth, psychological analysis of this idea would have many implications for areas such as happiness, learning, addictions, relationships, disorders, etc.

Path dependence is the idea that the set of decisions we face is limited by decisions one has made in the past, even though past circumstances may no longer be relevant.

In other words, inferior standards can persist simply because of the legacy they have built up.

The most commonly used example to illustrate path dependence is the QUERTY vs. DVORAK keyboard story. 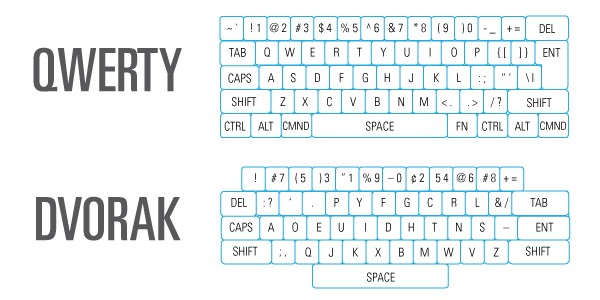 QWERTY, the keyboard, was designed in 1878 for the Remington No. 2 typewriter. The design purposely put the most commonly used letters “far away” from one another to prevent mechanical jamming. Typewriters soon became obsolete, yet the QWERTY persisted. The economist David Paul (1986) argues that QWERTY’s triumph over its initial rivals resulted largely from the happenstance that typing schools and manuals offered instruction in eight-finger “touch” typing first for QWERTY. The availability of trained typists encouraged office managers to buy QWERTY machines, which in turn gave additional encouragement to budding typists to learn QWERTY. These positive feedbacks increased QWERTY’s market share until it was established as the de facto standard keyboard.

In the 1930s the Dvorak keyboard came on the scene. Despite experiments showing the keyboard’s superior ergonomic efficiency (all the most commonly used letters are “close” to one another), Dvorak couldn’t gain a foothold in the keyboard market because QWERTY was so widespread. So, our choice of a keyboard today is governed by history, not by what would be ergonomically and economically optimal.

A lesser known example of this phenomenon is the use of railroad gauges that are 4 feet 8.5 inches, which began in Liverpool in the 1830s. These railroad gauges are now used on over half the world’s railways. 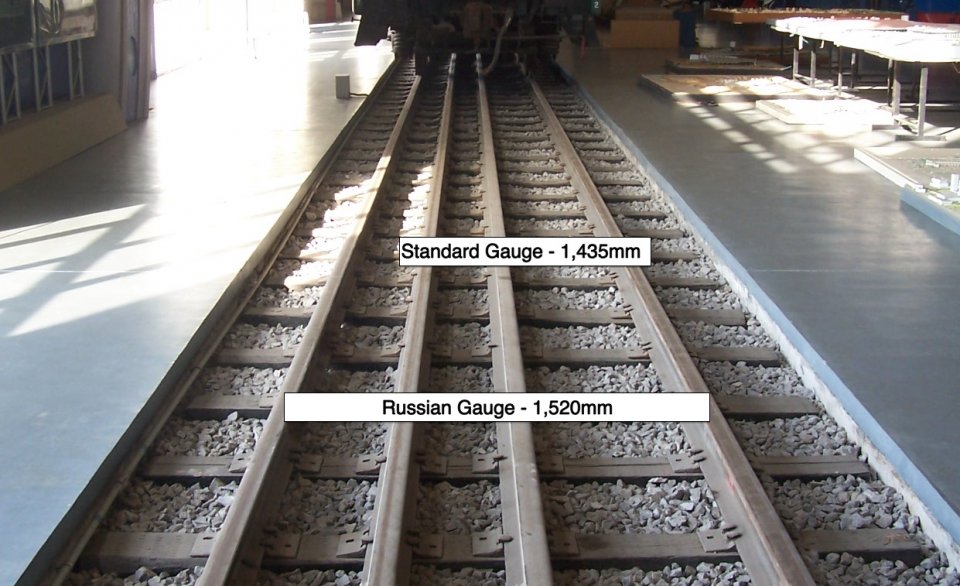 The “Father of the Railway,” George Stephenson, built the first public inter-city railway line in the world to use steam locomotive, the Liverpool and Manchester Railway which opened in 1830. He used 4 feet 8.5 inch gauges because he had experience using the gauge on an older system of primitive coal tramways serving a small group of mines near Newcastle, England. Rather than determining optimal gauge anew for a new generation of railways, he simply continued his prior practice. His model served as a model of best practice for many of the earliest modern railways in Britain, continental Europe, and North America.

Yet, most railway engineers today view this 4 feet 8.5 inch gauge as narrower than optimal. Why should we keep using a gauge adopted more than two hundred years ago for horse-drawn coal carts for powerful locomotives, massive tonnages of freight shipments, and passenger trains traveling at speeds as great as 300 kilometers per hour (186 mph)?

Because although engineers would choose a broader gauge if the choice were open, they do not view potential gains in operating efficiency as worth the costs of conversion.

I could type this blog faster with less strain on my hands using a Dvorak keyboard, but the time and energy it would take to learn how to use a Dvorak keyboard wouldn’t justify me switching over.

So how could this idea be applied in the field of psychology?

It takes lots of time and energy to find a partner, to find love. You wade through those early dates, you gradually learn the person’s quirks, values, beliefs, fears, hopes, and dreams. You have intimate experiences with them. You cry, laugh, and travel together. You develop intense connections.

But what if…at some point during this charging stampede of life and love…you encounter someone else who seems perfect, ideal, undoubtedly better than the person you’re with? Maybe it’s a co-worker who makes you laugh like you’ve never laughed before…or maybe you’re at party and this person asks you piercing questions and seems to understand a part of you in which your partner was always callously indifferent? Or maybe you’re at a family reunion and the brother of your husband seems full of life, confident, charming, and you wonder…

No. You love the person you’re with…you’ve chosen the QWERTY keyboard and the 4 feet 8.5 inch gauge and they work just fine. The time and energy and turmoil and chaos it would take to make the jump don’t justify the switch.

And who’s to say this new person is optimal? Or if they even share your enthusiasm? We’re all engulfed in uncertainty and the clock is ticking. Life is actually smoother and easier if we’re not always looking for the optimal…if we accept rather than search.

But for the sake of argument let’s say we somehow know this new person is optimal and that they think you’re optimal too. Doesn’t matter. We encounter these possibilities almost everyday (most of us willfully ignore them), but we’re already experiencing path dependence with our high-school sweetheart…we move on.

I’m severely addicted to coffee. During college, early internships, and my first jobs I drank it like a maniac to keep on grinding. Now I’m completely dependent on the substance.  Yes, it would likely be optimal if I didn’t spend so much money on coffee, and if I didn’t experience headaches and crankiness if I didn’t get my fix, if I didn’t get distracted and shiver with delight when I smelled coffee beans. But there’s too much going on with my life right now (job, writing, reading, calling my grandmother, daily tug-of-war sessions with Hank, etc.) for me to ween myself off caffeine. Apply this to people who consistently use alcohol, marijuana, etc. to get through the day.

Many people are in “sub-optimal” jobs they dislike. There’s another occupation they’d rather be doing and in which they’d be providing more value. Yet they continue with their dreary, soul-sucking 9-5.

I remember when I first moved to NYC I thought I’d wait tables for a couple of months then find a job in journalism. But the novel I was working on, my own research, learning, reading, and waiting tables always trumped the effort and uncertainty to find an occupation which I wasn’t even sure I’d enjoy or benefit from. Three years have gone by.

Again, often the time and energy to search and acquire a new job doesn’t outweigh the subsequent uncertainty, upheaval, and strain. The current job pays the bills, feeds the kids, and allows you to go on a pleasant vacation once a year. Why change?

To conclude, I believe that our society and culture subtly shoves down our throats these notions of ideal love, ideal health, and an ideal job. Of course we should strive for finding the best partner, maintaining a healthy lifestyle, and working in an occupation we’re passionate about. But we also have to be realistic and realize that something has to give…something will always be sub-par.

We are constantly passing up optimal opportunities because of path dependence. I think if more people acknowledged this fact many disorders, mid-life crises, and bouts of depression would be alleviated.

So , when I’m on a train using 4 feet 8.5 inch gauges, typing on a QWERTY keyboard an email to my bartenders about upcoming drink specials, fiendishly drinking coffee, and thinking about the date I’m about to go on with a girl who may or may not be the one…