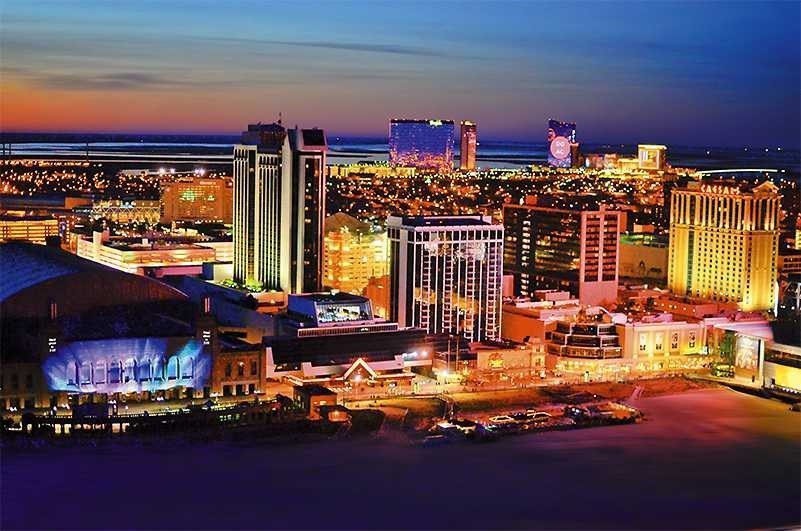 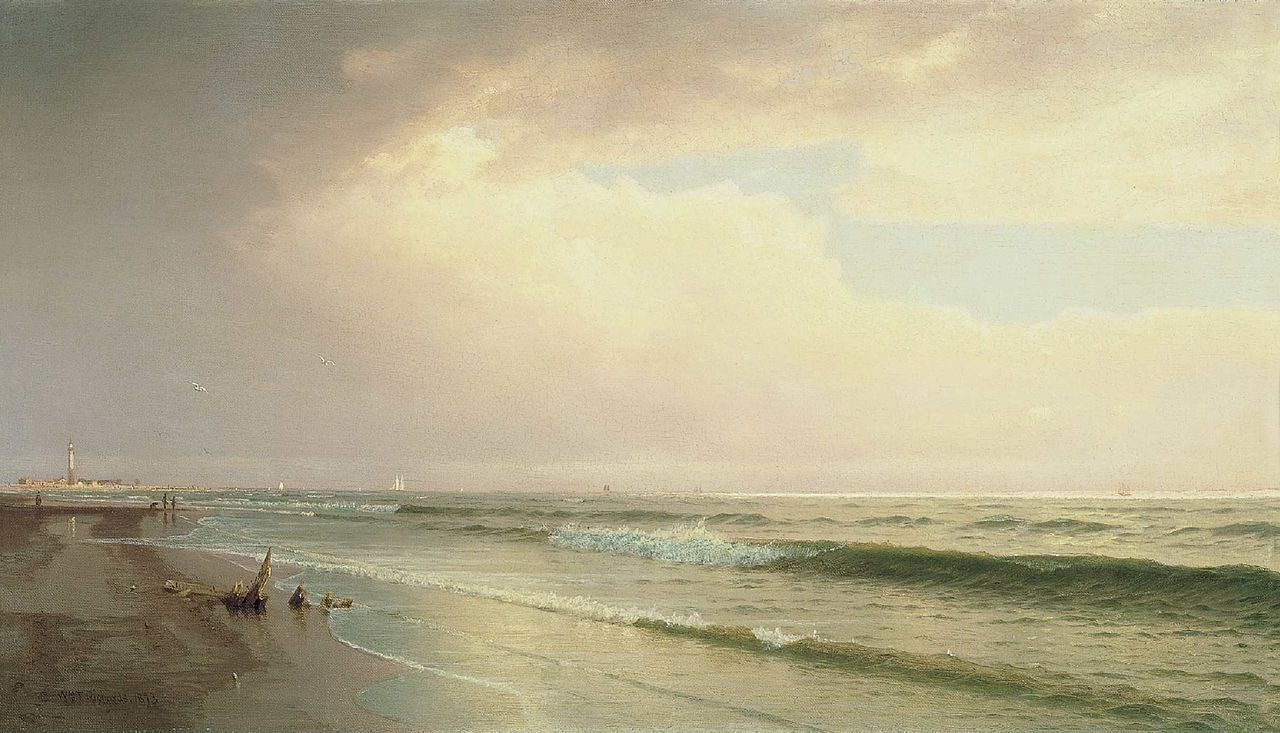 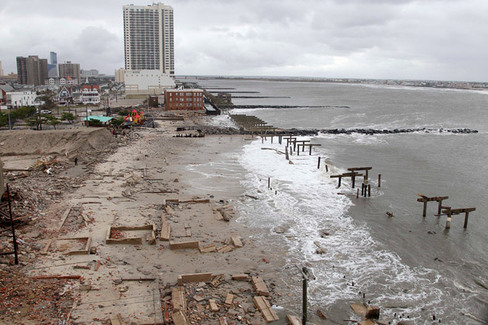 What…what happened? We’ll get there….

In 1870 the first boardwalk in America was constructed here. It cost $5000 and was 1 mile long, 8 feet wide. Some of the largest hotels in the world were built here at the turn of the 20th century. The Marlborough-Blenheim Hotel was completed in 1906 and was the largest reinforced concrete building in the world: 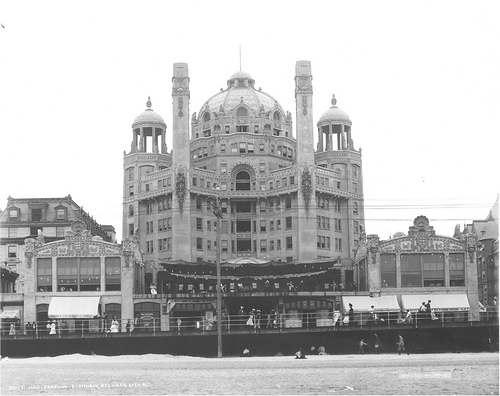 It was demolished in 1978 (the year the first casino was built).

In 1878 the single railroad line couldn’t keep up with the tourist demand. The Philadelphia and Atlantic City railways were also constructed: 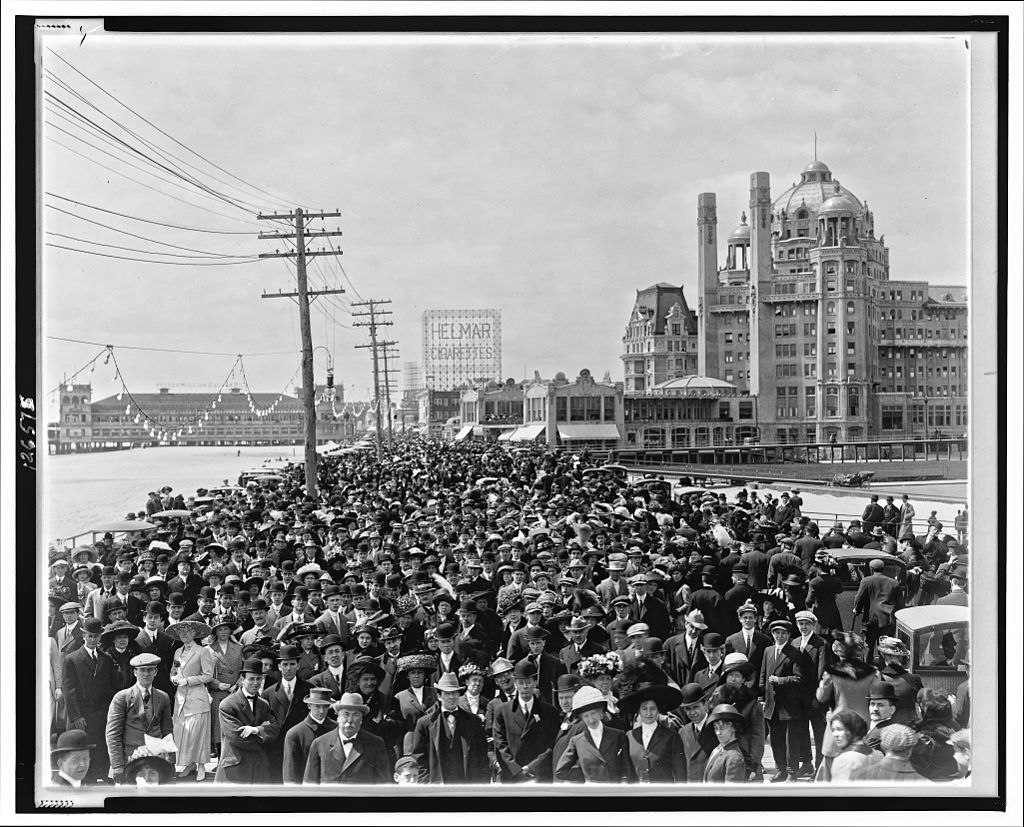 (See the Blenheim hotel on the right?)

AC was the inspiration for the original version of the board game: Monopoly 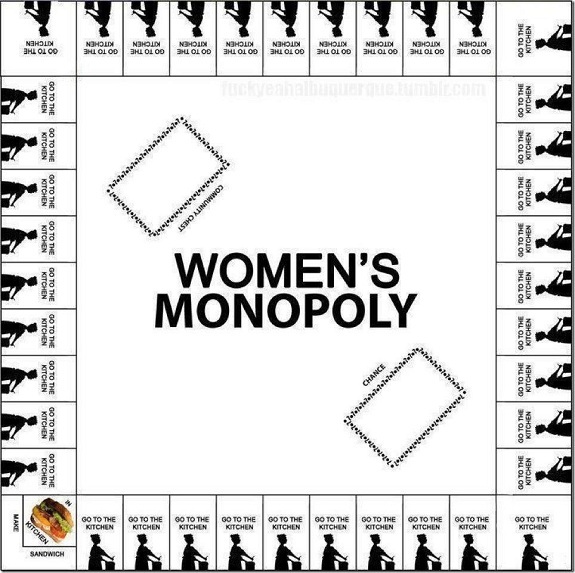 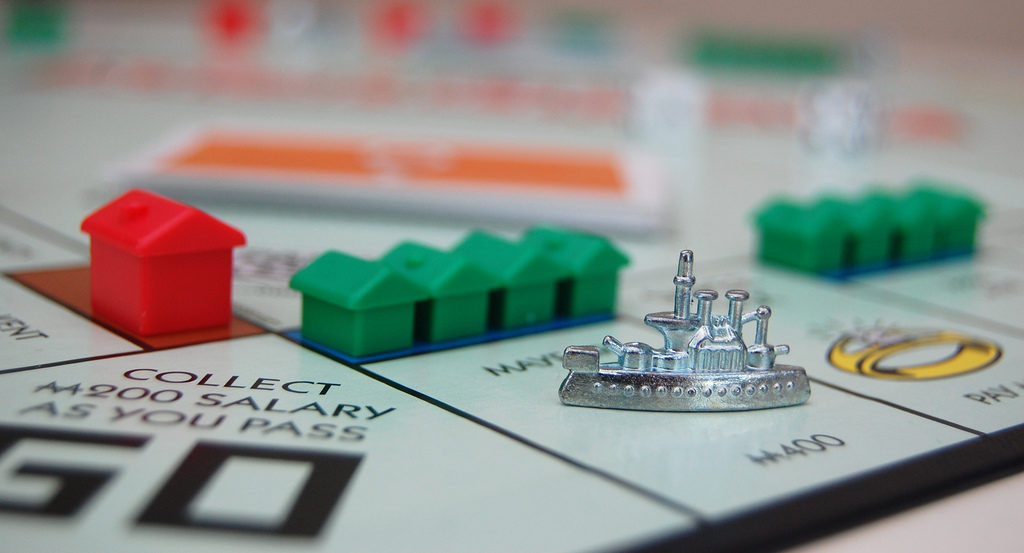 (The internet is crowded with memes and jokes concerning how boring and long Monopoly games are, how they destroy friendships, how people flip the board over out of frustration, how games are rarely finished, blah blah blah, NOT FUNNY…never once in my life have I ever turned down a Monopoly game or suggested for a game to be cut short. Never, my friend, never.

AC is the birthplace and current home of the Miss America Beauty Pageant. Between 2004-2014 it took place in Las Vegas though…what I call a one-decade-night-stand. This makes sense to me on many, many levels. 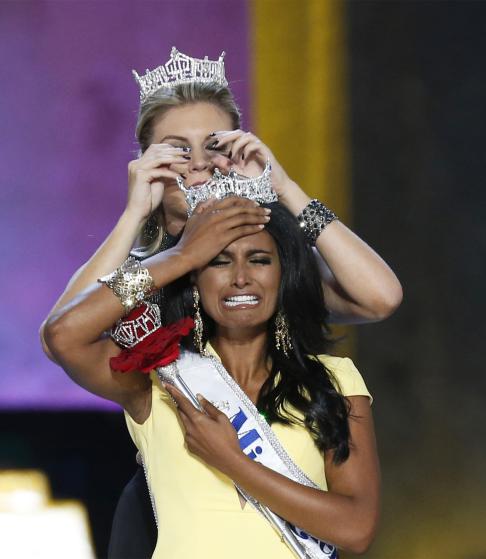 Miss New York having a moment as she wins Miss Budweiser 2014.

Speaking of Miss New York’s, The 2016 Miss New York representative was from my stomping and dumping grounds…Staten Island…according to her website…”She has always believed ‘It’s kind of fun to do the impossible,’ & looks forward to making the “impossible” a possibility.”

AC’s golden era…it’s shining, vigorous, reckless youth…was during Prohibition (1920-1933).  The gangsters thrived in this city…which was then known as the world’s playground. Hence the place becoming the setting for the excellent TV show: Boardwalk Empire. 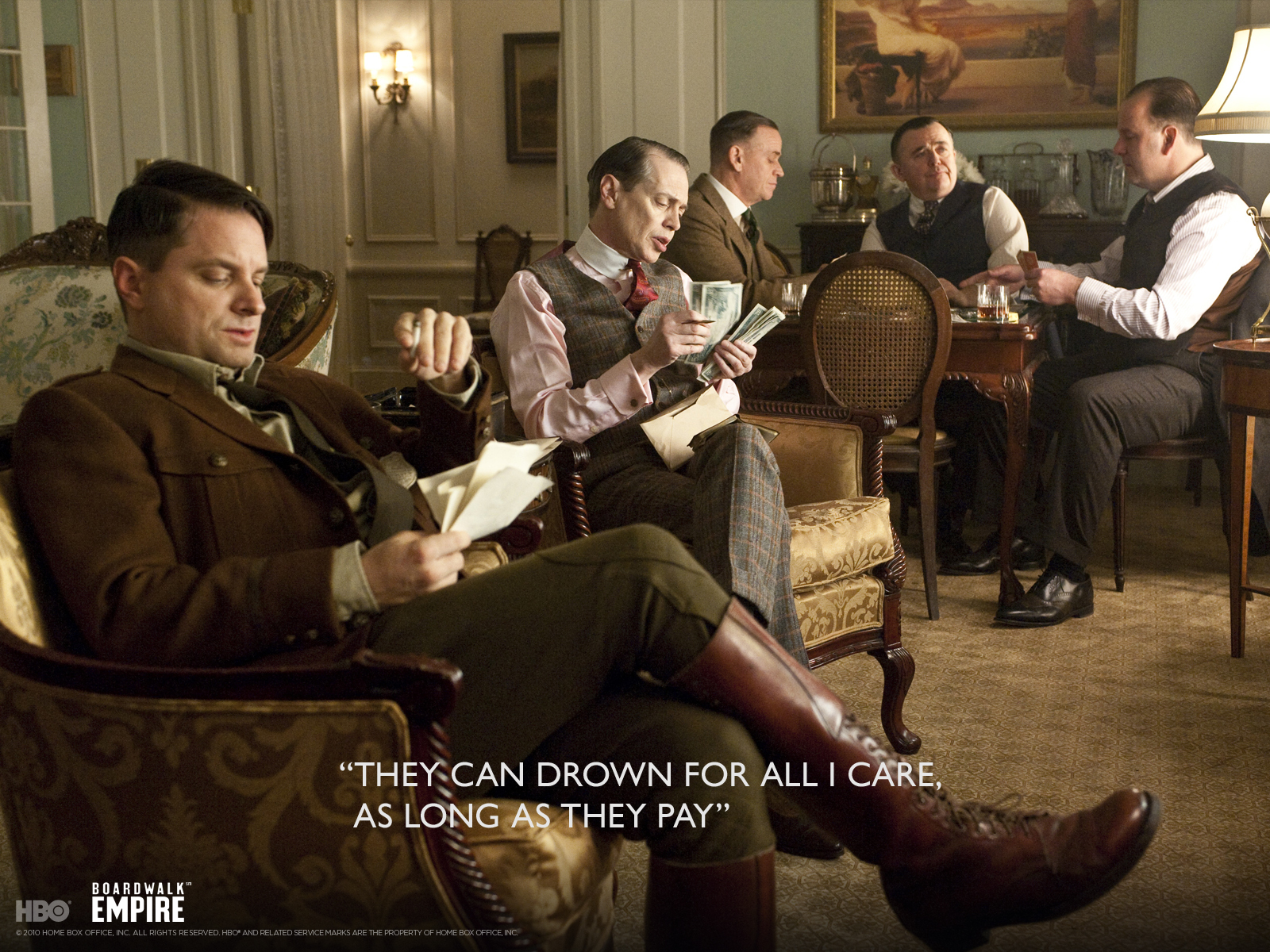 Despite AC having a prosperous beginning and a profligate golden era…due to fast, cheap jet service to other resort cities like the Bahamas and Miami in the 1950s and 1960s…and other things I don’t know about…Atlantic City began steadily going down the toilet.

An attempt at revitalization was made in 1976 when casino gambling was approved.  As mentioned above, the first casino was constructed in 1978. And in the 1980s Mike Tyson had most of his fights in AC. 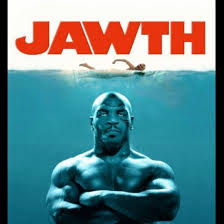 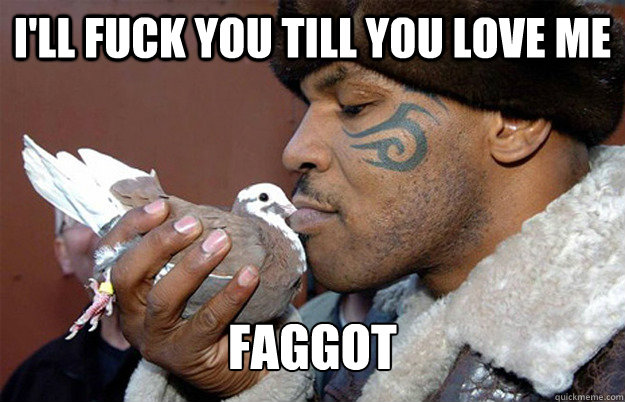 In 2013, 49% of Atlantic City residents were below the poverty line.

In 2015 Ceasars Entertainment filed for Chapter 11 bankruptcy…reconsidering the future of their AC properties.

Chapter 11 bankruptcy translation into layman’s terms: “Uh, shit hit the fan…let me, uh, clean this up…just give me a minute.”

Last time I was in AC with friends it was May 2015. Throughout the trip they made fun of me because I was constantly trying to read a book during the “down time,” (when I wasn’t dominating them in beer pong) and before falling asleep. (It doesn’t take me long to get ready for stuff and I don’t sleep). We were at a place called Harrah’s. Here’s a view outside our hotel window: 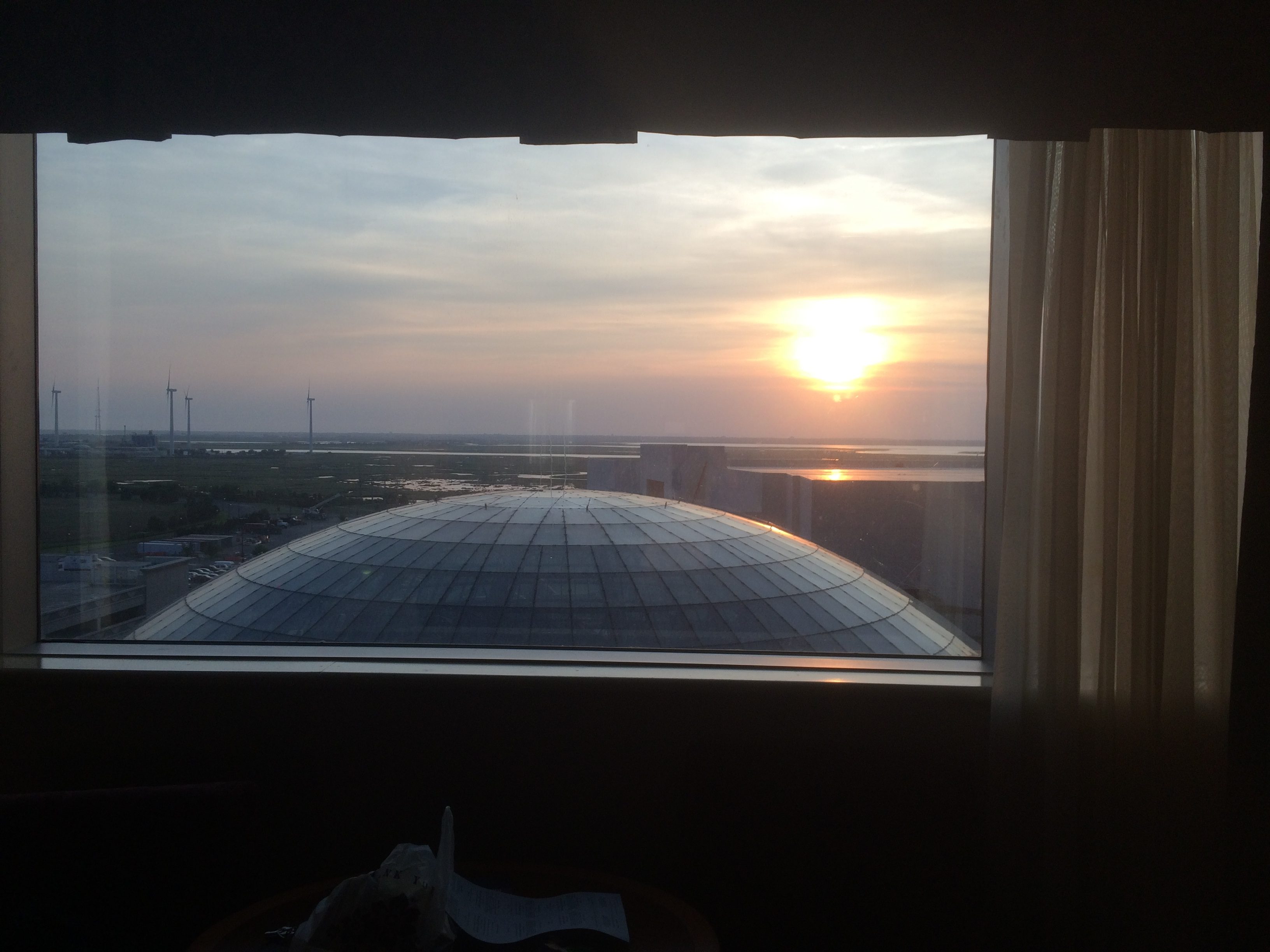 Inside that dome was a club.
During the trip my friends and I excessively gambled and drank (nothing new). My friend in finance (a trader who treats real money like monopoly money) donated $1000 to Harrah’s. At the time, I was in a relationship and in love so I wasn’t hitting on women. But my one friend, Dunken Collins, was single and “trying to get his dick wet.” So I volunteered to be a shameless wingman.

There was a pretty woman sitting alone at the bar wearing a bowler hat (I’m serious) and drinking a brown-colored liquor: neat. I fumbled through introductions then she started dancing sensually (like the salt water taffy) with me and my friend. She asked, “Do you guys have a hotel room?”

“Are you a prostitute?”
“Yes.”
“Ah.” She was nice though, and we danced and talked some more. I started grilling her about her occupation and drunkenly informed her that I have zero negative judgments about her chosen path in life. She started to leave. “But wait…hypothetically, how much do you charge for the night?”
“The whole night?”
“Yes.”
“$300. That’s not usually what I charge though. I’m from NYC. I’m here on vacation.”
“Ah. So what do you charge in NYC?”
“$600.”

My friends and I returned to the blackjack table.

So, despite Atlantic City (nickname: Always Turned On) going down the drain, there’s at least one redeeming feature about this metropolis cesspool…

The whores are half-priced.