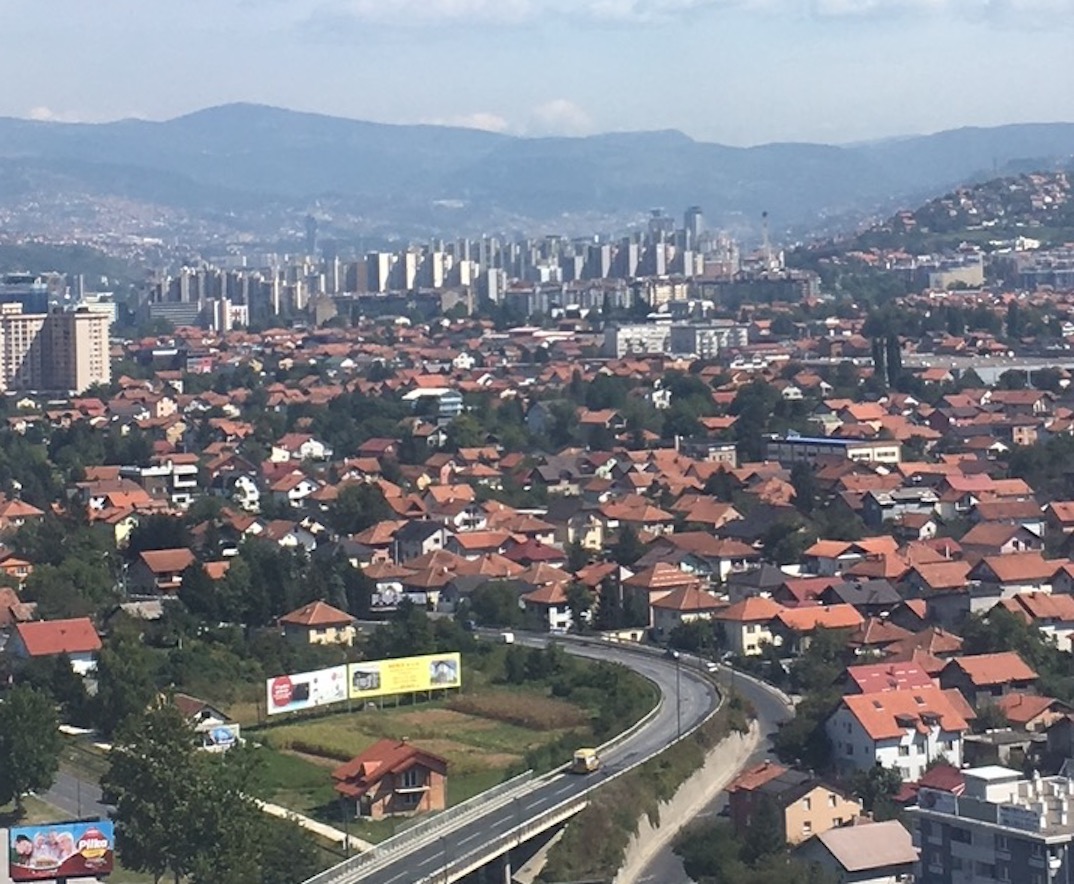 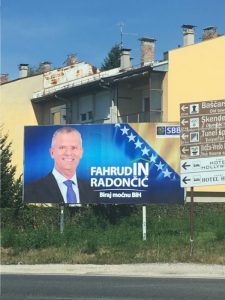 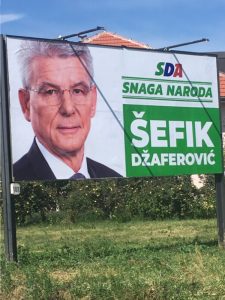 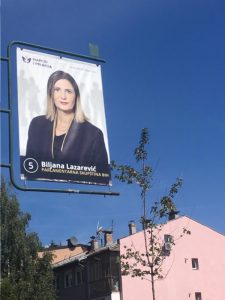 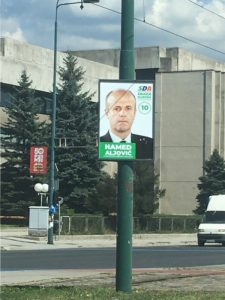 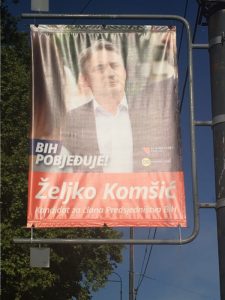 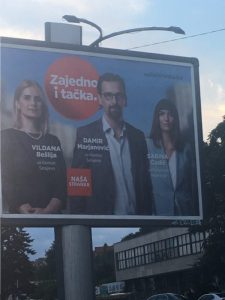 In a country that is struggling economically, that experienced the worst genocide since World War II twenty years ago, politics is one of the only place where people can find jobs and security.

“The most secure job is with the government,” says Danijela Mehic, who was born and raised in Sarajevo and gives tours to foreigners, “The only way to make a change in life is to join a political party.”

But despite the political power and gridlock, the city is attempting to become a tourist destination and to is trying to improve economically, moving on from the ethnic-cleansing nightmare of the Bosnia War.

“Last year we had four times more visitors than ever,” says Danijela Mehic, “This year there’s even more. And every year we put out the red carpet for the Sarajevo film festival.” 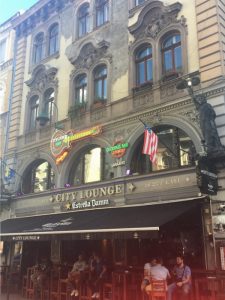 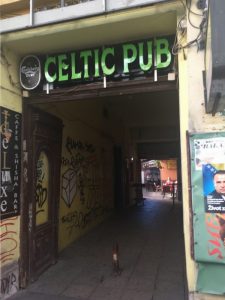 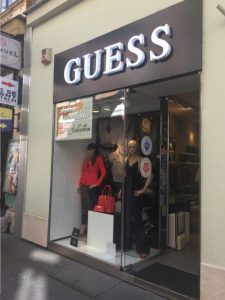 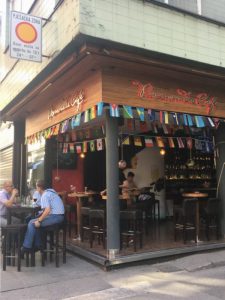 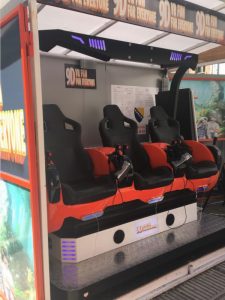 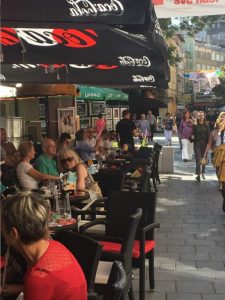 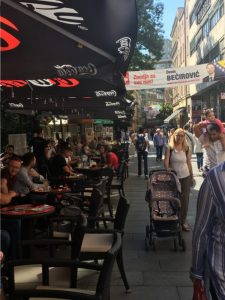 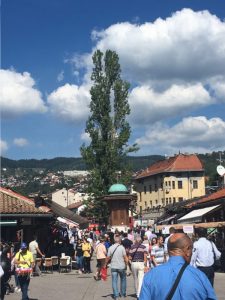 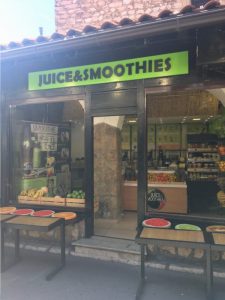 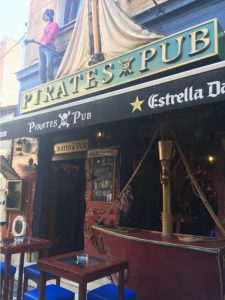 “In school we go on friend trips to the Catholic Church, to the Synagogue, and to the Mosque. We study different religions,” says Emina Ivazouié

“In school we study the dates of the war, the governmental system, but not the details of the war itself. Because there are three different opinions.” says Dledina Ivazouié

*Emina and Deledia are muslim sisters (mother is a muslim) who don’t wear the hijab because “We like our hair.”

“Our parents say we’re lucky. But if you’re young or under 18, it is difficult to find a job.” says Ali Ljuštaku, who plays guitar in his father’s band.

“Most families here are mixed.” -Ali

R (Melika Borovina): The only thing missing here is jobs. We’re not that developed compared to the rest of the world.”

W: (Amna Maudžo) “I think there’s still a lot of tension because of the war. I want to go abroad after school.”

R: I’m okay with being friends from different groups. But parents still say things like, “Serbs cannot be trusted,” and I’m sure they think the same thing about us.

R: Culture here is like a a meeting of cultures. It’s mixed here. You can really see everything.

[In Sarajevo it is possible to stand in one place and see a Roman Catholic Church, a mosque, and an Orthodox Church…I have pics]

R: We don’t express our nationality on the streets, but we hear it on the news, and see it in the papers.

R: I love this country. But I don’t think change will happen anytime soon. We get promises, but nothing in return.

R: The Dayton agreement causes a lot of things not to be changed.

Lana Prlić, youngest member of Bosnian Parliament, born during the war, mother is Muslim and father is Catholic (they raised me in the way to have knowledge about each religion and tradition and to choose by myself what I what to be. And I choose to respect everything and everyone and to be atheist.”) —-perhaps Q and A? 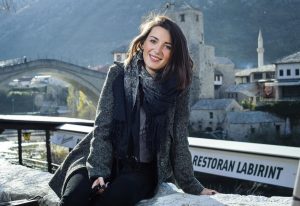 I became political active when I was 17 and still in high school. Why?
Because I wanted to change something, I wanted to make society in my
town Mostar more healthy without borders that are made by those who
enjoy luxurious life for over two decades based on divided society. Because
Mostar and Bosnia and Herzegovina are multicultural. SDP was my
choice [political party] because tradition, history, program of this party had the most
similarities to the way I was raised, to respect everyone, do not judge and
divide people only on the criteria are the good or bad ones. I did not want
to give up my country, because that is the country where my parents are,
my friends and all memories. I want to fight for next generations, because
generations of my grandparents barely survive due to low pensions (cca. 100
euros minimum), generations of my parents lost their youth in the war, and
my generation lost childhood explaining ourselves are we bosniaks, serbs, or
croats why today my generation is leaving. For the record, in the last 4
years 5% (80,000) of population of B&amp;H left this country.

A:The biggest issue is that youth do not vote and if we add to it fact that elders
mostly vote we can conclude that this country is ran by older generations.
Youths have a power to change power every elections and they do not use it
because of the complicated system and political culture that presented politics
to youths in B&amp;H as something non changeable. But they can change it, SDP is an example how youths can change help and recover party, I am sure that they
can do it with the country as well but they need opportunity. At the other
hand, youths today are involve in many NGOs, and others but unfortunately
mainly they see political party as the way of employment, and again for it
political culture is the main cause.

Obviously Bosnia is the phenomena country where with the less of 4 million people
we do have three presidents, of each ethnic group and mostly they represent
party interests not state interest. From 2014-2018 we had 3 presidents and non
of them made decisions in Bosnia and Herzegovina. One of the Presidents on his
meeting do not even play on hymn of Bosnia and Herzegovina. I will repeat
again you cannot represent country which you do not feel yours. We need
people in Presidency which will represent every each citizen of Bosnia and
Herzegovina no matter their ethnic group, because Presidency is the mirror of
our country and clearly in the last 4 years it was broken.

Dayton Agreement had a goal to establish peace here, and that is the most
important thing. But DPA put this country in the hands of few families which
run nationalists parties, this country cannot function and cannot be healthy if
people here are divided in the constitution in the core of political and social
system. Bosnia and Herzegovina should be country of all its citizens no matter
where they live. DPA is discriminatory, by that education system as well,
electoral system as well. What we can expect from the country in which
constitution is discriminatory? How to develop? How to solve life issues, when
on every issue which is not in interest of nationalist parties they have right on
national vital interest or ethnical veto? It is clear that DPA was an experiment
and it failed together with the holders of its, OHR.

This country should be country of all its citizens led by
those who feel this country as its own, by those who listen people and do have
responsibility towards them, led by people who found life issues way ahead
national issues. Nationalist’s countries are mostly poor countries, and
unfortunately Bosnia is every year on the bottom of every list. This country
need rehab and I hope at Sunday my party will get a chance to make B&amp;H
country for all together with our candidate for the presidency Denis Becirovic
who we represent every each people in this country no matter its name,
religion or ethnicity. My biggest wish is to make country where people will
come and youths return from Western countries, so parents do not longer speak
with their kids by Skype or see them only during the holidays.

Boriša Falatar….ran for president, but lost. Waiting on his response to my second email… 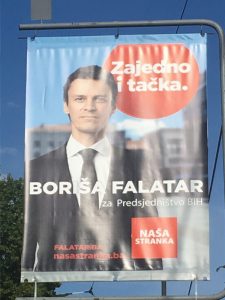 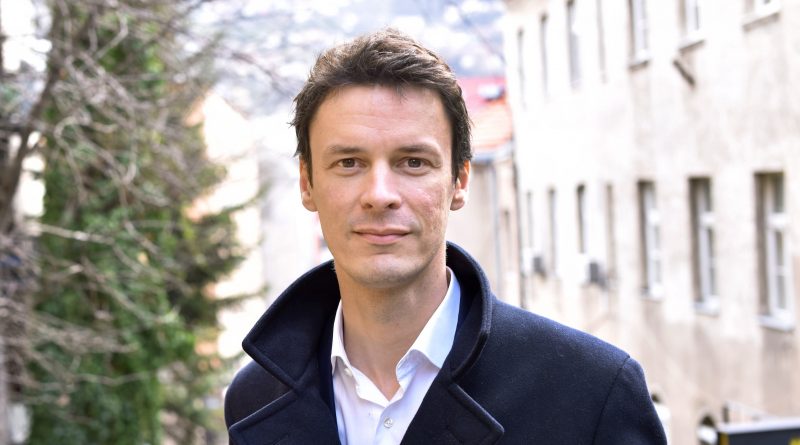 His father died when he was 8, his grandfather was in the concentration camps. When Borisa was 16 the Bosnian War started on April 5th, he was at a sleepover with a friend when his friend’s father woke him up and said, “Sarajevo is occupied.” They went to the protests.

“At first, the war was super boring.” But nobody could go out. Everybody was in shelters. He was watching movies. No electricity. “You don’t think it’s dangerous.”

Danijeja (tour guide) spent 3 months underground. She can’t go to the Bosnian War museum because it fills her with pain. She married during the war and had a child…”a way to have something behind yourself.”

Boris’s paternal grandfather is Croatian. His paternal grandmother is Serbian. His mother is muslim. He grew up in a Jewish community. The war for me was: what the hell is happening? Different parts of my family are being blamed. Who am I?

Mother was shot and killed during the war when he was 18.

Worked for the U.N. as an interpreter.

I never settled in one place in my life. Bosnia is my home. Lost 5% of the population in the last 4 years. People live with photos of their children.

1.5 years ago he traveled around Bosnia, spoke to activists. There’s not unifying force.

All the presidents here are like Trump. Bt they never achieve anything. We have three Trumps.

“Screw you assholes!” that is clickable.

My mission isn’t all about getting elected. It’s about healing the wounds of this country.

No country is as diverse as Bosnia.

When Europe was killing itself 500 years ago, we were living together.

Politicians here scare you with the worst possible option. Entrench yourself in a political party or the other will win.

Despite Bosnia’s difficulties and political in-fighting, there are those who are working towards a better future, and a youth that is open to acceptance and moving forward. 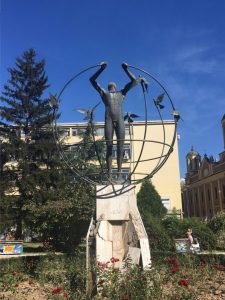